We Are minus 3 units overall so far.
Bad weather in Washington, D.C. spells a low scoring affair for the military bowl. Almost varsity changes pick to bowling green +7.  2 units on that. Then duke has gone upto a+10 spread!  Take that with a change of 3.5 to 4 units at +10.  All the original picks have shown us to go against our adage of “don’t bet a team losing the coach”. The adage has shown to be correct. Teams losing the head coaches are getting creamed ats. Most are even losing outright (another reason we are changing San Jose state to bowling green).

So far, here at almost varsity sports, we are 2-1 cashing on Nevada (+10.5) and Utah St (-10.5), but losing San Diego State (+3.5).  It’s a long road to the national championship in January and many bowls in between.  For the remainder of the bowl season we will keep you updated on our selections and give a rating to each selection based on confidence (1-5).  Giving almost varsity the least credit possible we will take a combined rating of +1 through three games.

12/21 – Ball State vs Central Florida (in St Petersburg, FL)
-Ball State has lost three games all season.  The three teams the Cardinals lost to combine for a season record of 33-5.  Kent St, Northern Illinois, and Clemson are no teams to scoff at when looking at these losses.  Ball State has a high powered offense averaging 35 ppg.  A combination of a junior QB, in Keith Wenning, who has thrown 22 tds this year, and a Sophomore RB, in Jahwan Edwards, who has rushed for 1300+ yds and 14 tds, make this offense extremely potent.  The defense is where this game will be decided.  The Cardinals are giving up 31.5 ppg.  If they can contain the UCF offense, which is also scoring 35 ppg then they should be ok.  I think Ball State’s offense will keep this game close, and a UCF team that just lost in its conference championship game will be reeling just enough.

12/22 – East Carolina vs Louisiana Lafayette (in New Orleans, LA)
-East Carolina does not belong in a bowl.  Plain and simple.  The Pirates were 8-4 and lost to the only moderately capable opponents they played all year (lost by 38 to South Carolina, 21 to UNC, 20 to UCF, 28 to Navy).  The last game of the season was a win in double overtime against a Marshall team that was 5-7.  Don’t forget, the Ragin-Cajuns almost upset Florida (the number 3 team in the nation).  The defense of ULL is capable of stopping a relatively good offense.  In the last 5 games, the Ragin-Cajuns have gone 4-1 with the only loss coming to Florida by 7 (which they were leading late into the fourth quarter… very late).  I wouldn’t be surprised to see ULL win by 2-3 scores.  At first glance this is my FAVORITE of the college bowl season. 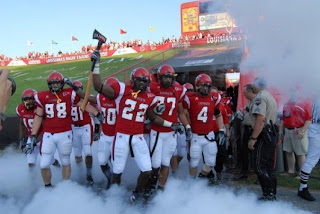 12/22 – Washington vs Boise State (in Las Vegas, NV)
This will be very unexciting.  Boise State plays great defense and has a hideous offense.  I tried to watch this Boise State offense move the ball this year and I almost got sick.  However, if you’re going to pick one team in college football that plays up in bowl season, it’s these Boise State Broncos.  This defense will stifle a Washington offense that has only scored 23 ppg.  I think Boise State gets a few key turnovers to win this game and cover.

12/24 – SMU vs Fresno State (in Honolulu, HI)
Don’t know this game well enough to make an in-depth analysis, but I know the Fresno offense is very explosive and SMU is 6-6 with no impressive victories.

12/26 – Central Michigan vs Western Kentucky (in Detroit, MI)
I absolutely hate betting with teams who have lost head coaches to greener pastures.  Western Kentucky fits this mold.  However, Central Michigan is an extremely poor team.  Central Michigan is 6-6 and has been outgained in 10 of the games this year.  I think the Hilltoppers will get extremely hyped for the first ever bowl game.  The defensive coordinator has taken over for a coach that has left before the bowl game before.  It was when he was coaching at Miami(OH) in 2011.  Miami(OH) won that game.  I think an overmatched Chippewas team will still be beaten regardless of coaching here.

12/27 – San Jose State vs Bowling Green (in Washington, DC)
Another game I am going against my cardinal rule of avoid teams losing head coaches.  However, San Jose State is a much better team then Bowling Green.  San Jose State has only lost two games this year: one to Stanford, and one to a very very good Utah State team.  This team is now a top 25 team and I think the talent overwhelms Bowling Green

12/27 – Cincinnati vs Duke (in Charlotte, NC)
Here is where I am finally using my coaching rule.  The Bearcats’ coaching staff is leaving for Knoxville, TN and I can’t see the Bearcats getting up for this game.  They were a win against Rutgers away from playing in a BCS game.  Duke is playing in a bowl game for the first time since 1995.  The team that wants it more may win this game outright.

12/27 – Baylor vs UCLA (in San Diego, CA)
Talk about a shootout.  With an over/under total of 80 points!, this is projected to be the highest scoring game of the season.  I think Baylor’s play fluctuates too much to bet on them.  UCLA, in California, got a good draw.  Baylor fans most likely won’t come out in droves for the Holiday Bowl.

12/28 – Rutgers vs Virginia Tech (in Orlando, FL)
This game is a let down for both teams in different ways.  Rutgers had a great season and could’ve been playing in a BCS bowl.  Virginia Tech had an awful season, but preseason, was an outside contender at a national championship.  I don’t think Rutgers football has a following enough to bring fans to Orlando and I don’t think they will be able to get up for this game, losing the last two to Pitt and Louisville.  Virginia Tech fans are plentiful and loud.  I am picking this game solely on coaching.  Frank Beamer is one of the best coaches in the NCAA year in and year out, regardless of what anyone wants to argue.  The Hokies have played in a bowl game every year since ’93.  Bowl defenses are very good, and both offenses are prone to making mistakes.  I have to take the better coach and team history here in VA Tech.

12/28 – Minnesota vs Texas Tech (in Houston, TX)
Minnesota went 2-6 in a down year for the Big Ten conference.  Coaching rule comes back into effect here, but I’ve been lucky so far.  Each team I’ve seen where a coach has left, has a far less superior team matched up against them.  Tech is averaging so many points a game against a bad Golden Gophers team.  Throwing a curveball here, I think that a slumping Tech team (lost 4 of last 5) with different coaching staff won’t be able to win by 2 tds.

12/29 – Air Force vs Rice (in Fort Worth, TX)
Rice has a football team?  Air Force has a team that does not turn over the ball much.  The QB has only thrown 3 ints all year.  The offense centers around the triple option and I don’t think the Rice team will come prepared.  There is something about this game that is telling me to LOVE the Falcons.

12/29 Navy vs Arizona State (in San Francisco, CA)
Arizona State is a very underrated team and I think Navy is high off squeaking out a win vs Army.  However, I think they were on a season high in that game.  Traveling across country will not bring out a big crowd for the Midshipmen, and Arizona State fan base travels fairly well.  Don’t lay more than two tds here.

12/29 Syracuse vs West Virginia (in Bronx, NY)
Remember when WVU was a possible national championship contender with a Heisman winning QB?  The team hasn’t changed.  They played in an extremely tough conference with a ridiculous schedule.  Although this will be a game of fireworks (both offenses are very good).  I think West Virginia will outscore the Orange and win this game 45-35.

12/29 Oregon State vs Texas (in San Antonio, TX)
Practically a home game for a team with a ridiculous fan base.  I think Oregon State is a very overrated team.  They are very good, but public perception is high, a little too high.  Texas is a good team with a great coach.  Mack Brown will have the Longhorns ready.  I would like to see David Ash get the start over Colt’s little brother Case McCoy, but I’ll take the field goal in a game I think will be pretty low scoring.

12/29 TCU vs Michigan State (in Tempe, AZ)
I loved Michigan State at the beginning of the year because of Le’veon Bell.  The Michigan State offense has let me down time after time this year.  The defense has kept them in games.  The same goes for TCU.  Starting QB Casey Paschall went down for the year because of off-field issues.  (If you take a look at the college football preview article I raved about him – for good reason.)  These two defenses will stop slow offenses.  This will be extremely low scoring and I could see TCU squeaking this one out 14-13.