Skip to content
College Football Preview
You’re favorite fight song.  Gameday Traditions.  Rivalry Trophies.  Another Oregon uniform combination.  The Tomahawk Chop and Gator Chomp.  The 12th Man.  Touchdown Jesus.  Almost eight months after a Crimson Tide beating of the Bayou Tigers, college football is back, and I, for one, couldn’t be more excited.
In our first article here at Almost Varsity Sports, we will give you EVERYTHING you need to know about college football before the season starts.  If you want to impress on your interviews at ESPN, feel free to throw out the sleeper teams and players listed below; you’ll definitely turn some heads.
National Championship: USC over Alabama 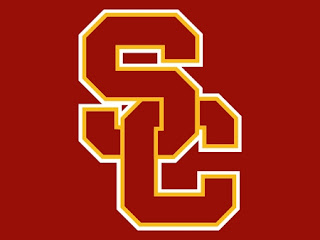 Sleeper National Championship Contenders:
1)      Florida State
2)      Georgia
3)      Clemson
4)      West Virginia
5)      Michigan State
Top 5 Heisman candidates:
1) Matt Barkley
2) De’Anthony Thomas
3) Geno Smith
4) Landry Jones
5) Montee Ball
Sleeper Heisman Candidates:
1)      EJ Manuel
2)      Tahj Boyd
3)      Le’von Bell
4)      AJ McCarron
5)      Casey Paschal
Conference Snapshots:
ACC
Champion – Clemson Tigers (Over Virginia Tech in the ACC Championship)
Clemson started off last year 8-0 with two potential Heisman trophy candidates emerging.  Guess what?  Those two players were underclassmen.  Another year of experience under offensive coordinator Chad Morris should lead to an even more explosive offense.
However, no one is questioning the Clemson offense.  The picture in everyone’s mind is the Orange Bowl, where the Tigers gave up 70 points to Geno Smith and the Mountaineers.  The hiring of a new defensive coordinator may help.  Brent Venables will provide a simpler defensive package where the speed and raw talent of the Tigers should be enough to keep them in games long enough for the offense to pull away.
Key Game – @ Florida St.
ACC Preseason Game to Watch – Sept 3 – Georgia Tech @ Virginia Tech
Since the ACC has split into two divisions, Georgia Tech or Virginia Tech has played in the ACC Championship every year.  The winner of this game will throw themselves into the Coastal division driver’s seat with a two game lead over the other.  Virginia Tech is also a darkhorse national championship contender.  An early season loss to Georgia Tech will virtually kill any hopes of that.
Player of the Year Candidates:
1)      Tajh Boyd – winner
2)      Logan Thomas
3)      Giovani Bernard
Virginia Tech wins year after year with defense – this year will not be different.  If Thomas doesn’t improve on his < 2:1 TD:INT ratio he may not even be in this discussion in a few months.  Giovani Bernard is the best player in the ACC no one is talking about.  Due to NCAA sanctions, UNC will not be able to participate in the postseason, but Bernard will have the opportunity to spoil any championship hopes of Georgia Tech and/or Virginia Tech.  I don’t think Boyd is the best player in the ACC, but his stats, coupled with a solid year for Clemson will put him over the top.  I would even throw his name in the ring as a darkhorse Heisman candidate.
Sleeper Player – QB Mike Glennon, NC State
Sleeper Team – Wake Forest (Came within a field goal of playing for the ACC Championship last year)
Big East
Champion – West Virginia Mountaineers (Oh wait, too soon?)  **Pittsburgh Panthers
Looking up and down this conference I am not compelled that any team will make national news throughout the season.  The Big East can swing any way, any year.  This conference is the epitome of the Any Given Sundayadage (but for Saturday’s, of course).
I believe that the Louisville Cardinals is the best team in this conference because of a good coach and a great QB talent in Teddy Bridgewater.  However, I am choosing Pittsburgh to win the conference solely because they play Louisville at home and will get to face a good Cincinnati team after a warm up week while the Bearcats will still be shaking off the cobwebs of the offseason.
Key Game – vs. Lousville
Big East Preseason Game to Watch – Oct 13 – Lousville @ Pittsburgh
Plain and simple – I believe the winner of this game takes home the Big East title and what I believe to be an undeserved BCS berth.
Player of the Year Candidates:
1)      Teddy Bridgewater – winner
2)      Toni Sunseri
3)      BJ Daniels
Teddy Bridgewater is a great dual threat talent that will lead Louisville throughout the season.  They will spend most of the time sitting atop the conference.  I believe the experience of Toni Sunseri will keep him in this discussion for most of the year.  BJ Daniels may be my favorite talent in the entire conference.  He’s a big, bruising QB that reminds me a little of a collegiate Byron Leftwich with more mobility.  Unsatisfied with the comparison?  I’d be pretty happy to be compared with a QB that threw almost 12,000 yards and 90 TDs. 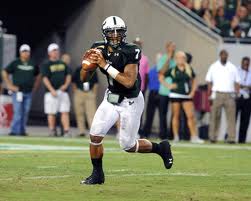 Sleeper Player – QB BJ Daniels, South Florida
Sleeper Team – Temple (Coming off a nice 9-4 season and a bowl win, Temple can surprise some teams)
Big 12
Champion – Oklahoma Sooners
The Big 12 is the second best conference top to bottom in the nation.  I do believe Oklahoma has a fairly favorable schedule; well as favorable as you can get in the Big 12.  They get Kansas St, Texas, and Oklahoma State at home.  The biggest test will be on the road at West Virginia, the newest member of the Big 12.
An extremely tough conference will allow for a slipup along the way for a shot at a national title.  Oklahoma has the coaching, talent, and the schedule to not only win the Big 12 conference, but compete for a national title.
Key Game – @ West Virginia
Big 12 Preseason Game to Watch – Nov 17 – Oklahoma @ West Virginia
Two extremely explosive offenses will be battling for the Big 12 championship.  I think this game will decide the winner of the Big 12.  It will be extremely high scoring but I believe that the porous West Virginia defense will make enough mistakes to give this game away to the Sooners.
Player of the Year Candidates:
1)      Tavon Austin – winner
2)      Landry Jones
3)      Geno Smith
Tavon Austin is arguably (although I won’t argue for him) the most explosive player in college football.  He returns kicks, rushes, and receives.  He had almost 1200 yards receiving, 190 rushing yards, and 1200 return yards.  He is too dynamic of a player to not be the best player in the conference this year.  Landry Jones is, in my opinion, the second best collegiate QB.  And for Geno Smith, hey, someone’s gotta get Tavon the ball.
Sleeper Player – QB Casey Pachall, TCU
Sleeper Team – TCU (Not much of a sleeper – should start off the season at least 7-0 and since they are beginning the season at #20, they will probably be a top ten team going into a battle @ Oklahoma State.  If they get on a nice enough run… who knows?)
Big 10
Champion – Michigan Wolverines (Over Wisconsin in the Big 10 Championship)
Denard Robinson is one of the best players in the country and will be a Heisman contender throughout the season.  I don’t see Michigan losing a game (in the big 10) until they play on the road at Ohio State to close out the regular season.    Another year under Brady Hoke will only improve the team.  1,000 yard rusher, Fitzgerald Toussaint, returns and provides the Wolverines with another playmaker alongside Robinson.
Key Game – vs Michigan State
Big 10 Preseason Game to Watch – Oct 20 – Michigan State @ Michigan
This game will should decide who will come out of the Big 10 Legends division to play Wisconsin in the Big 10 championship.  If Michigan can get somehow get by Alabama and beat Nebraska, they will still be a legitimate national title contender when this game rolls around.  A heated rivalry game with division and national championship implications?  I wouldn’t want it any other way. 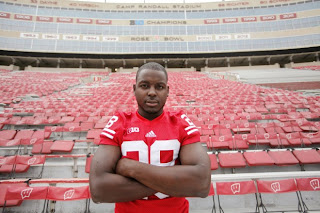 Player of the Year Candidates:
1)      Montee Ball – winner
2)      Denard Robinson
3)      Braxton Miller
Ball will not only be a player of the year candidate in the Big 10, but will have a real shot at a Heisman trophy.
Sleeper Player – RB Le’von Bell, Michigan State
Sleeper Team – Northwestern (Could start off the season 7-0.  With enough confidence, who knows?)
PAC-12
Champion – USC (Over Oregon in the Pac-12 Championship)
USC is as high powered a team as they come in college football this year.  USC has All-American caliber talent on both sides of the ball with a Heisman trophy contender under center.  The offense of USC should be everything it was last year and more.  Matt Barkley is the best quarterback in college football and picking up Penn St transfer, Silas Redd, gives USC two 1,000 yard rushers in the backfield.  The group of receivers is one of the deepest in the country.
Key Game – vs. Arizona St.
Pac-12 Preseason Game to Watch – Nov 3 – Oregon @ USC
I believe this will be a preview of the Pac-12 championship.  However, at that point in the season neither team will be able to afford any slip ups.  Both teams are national title contenders and this could be a battle of two unbeaten teams.
Player of the Year Candidates:
1)      Matt Barkley – winner
2)      De’Anthony Thomas
3)      Jonathan Franklin
Matt Barkley and De’Anthony Thomas are the runaway one/two when discussing a Pac-12 player of the year.  Each is an outstanding talent and arguably the best at their respective positions.  It is not even worth talking about anyone else in the conference.
Sleeper Player – QB Matt Scott, Arizona
Sleeper Team – Utah (Always a solid team and add in a very favorable schedule this year)
SEC
Champion – Alabama (Over Georgia SEC Championship)
Alabama is obviously one of the most talented teams in the nation.  The only game I could see this team losing is when they go on the road to visit LSU.  Alabama only plays two other ranked teams the rest of the year (overrated Michigan and Arkansas).  I believe Georgia will be meeting Alabama in the SEC championship because of the extremely easy schedule they have.  Georgia will be in national title talks as they continue to win games.
Alabama has an extremely dominant defense and another year of experience will only help QB AJ McCarron.  McCarron will be the key to this team’s success.  If he has a mediocre year in terms of yards, TDs, and Interceptions, this defense is good enough to keep them in every game.
Key Game – @LSU
SEC Preseason Game to Watch – Oct 6 – Georgia @ South Carolina
Alabama/LSU would’ve been the easy game to choose.  However, this game will be the biggest challenge for a very solid Georgia team.  If they can get past this game, the Bulldogs will have a great opportunity to finish the season undefeated.  The only other ranked opponent they have on the schedule is a very overrated Florida team.  Georgia will be under the radar all year because of the shadow cast by Alabama and LSU, but look out for the Bulldogs.
Player of the Year Candidates:
1)      Aaron Murray – winner
2)      Marcus Lattimore
3)      Tyler Wilson
Aaron Murray will be an upset winner for Player of the year.  A great year for Georgia, accompanied with a shell of the original Marcus Lattimore will allow Murray to pull away.  Tyler Wilson will put up huge numbers at Arkansas.  I don’t think it will be enough to overcome the tough schedule.
Sleeper Player – QB AJ McCarron, Alabama
Sleeper Team – Vanderbilt (Easy schedule and they avoid the big dogs of the SEC West (Alabama, Arkansas, LSU))