Football season is once again upon us and there is no better way to get into it than with a few top 25 battles on the opening college football weekend.  Alabama is coming off ANOTHER national title and is looking for a three-peat.  There are a few capable teams standing in the way of the Crimson Tide that could have something to say about that illustrious third straight title.

Champion – Clemson Tigers (Over Miami in the ACC Championship)

Clemson starts off the year with a difficult test against the SEC runner-up from last year, Georgia.  The team has two potentional Heisman trophy candidates in Tajh Boyd and Sammy Watkins.  Another year of experience under offensive coordinator Chad Morris should lead to an even more explosive offense.

However, no one is questioning the Clemson offense.  The Tigers defense was the question all of last year but the defense continued to improve as the season went on.  Another year under Brent Venables will provide the defense enough to keep the Tigers in games and let the offense pull away.

Since the ACC has split into two divisions, Georgia Tech or Virginia Tech has played in the ACC Championship every year.  This year I believe this will change.  I think Miami has the talent and coaching to take the step into the national picture once again.  The winner of this game will throw themselves into the Coastal division driver’s seat with a two game lead over the other. 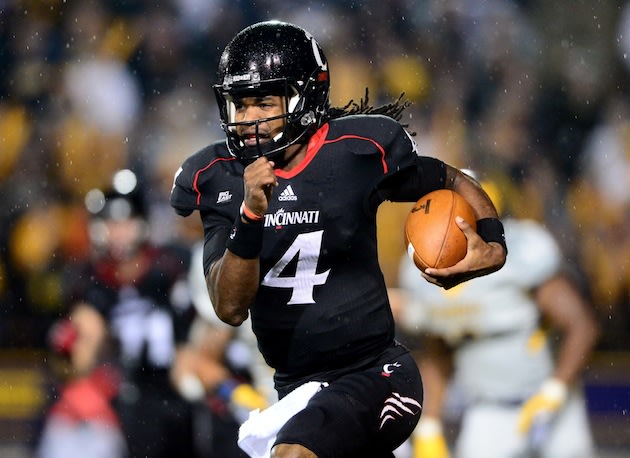 Going out a little bit of a limb here and not taking Louisville to win the American Athletic Conference.  Tommy Tuberville is a phenomenal football coach and it will only help to improve these Bearcats.  They have a very dynamic quarterback in Munchie Legaux.  He can move and has a pretty decent arm.  This team has a relatively easy schedule because of the conference opponents they face.  The two toughest games will be tests against Rutgers and Louisville.

Cincinnati gets their toughest test at home against the Louisville Cardinals.  Many people have Louisville as a potential national title contender, as do I.  But I think they will trip up with one game to play on their schedule to these well coached, pesky, Cincy Bearcats.

This game has the second and third best teams in this division squaring off.  If either team wants a shot at Louisville, and the AAC title, then they will have to win this game.

I have been preaching that the Horned Frogs are about to break out of their “mid major” view for years now.  This is going to be the year heads are turned.  Gary Patterson is one of the best coaches in college football and this team consistently puts out a top 25 defense.

The question, however, has never been about this team’s defense.  It has always been about whether or not the offense can put up enough points to win the game.  Last year AVS called for Casey Pachall to turn some heads and really make a name for himself, while bringing the Horned Frogs into the national spotlight.  He was suspended because of off the field issues and he was allowed back on the team this year.  They have the Big 12 defensive player of the year returning and Casey is back to make some moves.  Equipped with a great arm and playmaking ability, Casey will bring TCU to a Big 12 title.

Texas is returning practically the same team from last year and people are calling for this team to make moves this year.  Oklahoma State returns one of the most explosive offenses in college football.  This game should be for who will win the Big12.  I’m sticking with my Horned Frogs.  This is the year they make the jump.

Champion – Ohio State (Over Northwestern in the Big 10 Championship)

The Ohio State Buckeyes finished undefeated last year.  Braxton Miller was a major aspect of it.  Urban Meyer didn’t hurt either.  The loss of running back, Chris Hyde, will hurt the team, but not enough to keep them away from winning 10+ games.  This team plays in a week Big 10 conference and I don’t see anyone coming close to beating them.  A solid Northwestern team could be the only team that may surprise people.

With this game being at the Big House in Ann Arbor, I could see this game being trouble for the Bucks.  However, I think Ohio State is the more complete team and will pull out this game.  If Michigan still has a great record and a shot at the Big10 title then be aware that ANYTHING can happen in this rivalry game.

Champion – Oregon Ducks (Over Arizona State in the Pac 12 Championship)

Oregon has THE most explosive offense in the country and the defense is surprisingly underrated.  This team will beat up on teams this year and score a TON of points.  Marcus Mariota leads an extremely potent attack, and running back De’Anthony Thomas joins him in the Heisman race discussion.  Thomas can take it to the house at any point he touches the ball.  The defense was a top 10 defense last year and if they can stay in the top 15 this team will win the national title.

This game should decide who will take on the Oregon in the in the Pac 12 title game.  USC was my pick to win the national title last year and they severely disappointed.  Many players return and I think they will be the fighting ASU for the right to lose to Oregon.  Because the game is at Arizona State, I will say they take this home.

Champion – Georgia Bulldogs (Over Alabama in the SEC  Championship)

Georgia has a very inexperienced defense, but a very, very, good offense.  Recruiting for the Bulldogs has been great for the last few years.  Reloading on defense won’t be the problem for them.  Give this defense a few games and they’ll be ok.  Biggest game in the second against USC, so hopefully the defense will be on point after a tough Clemson Tigers test in week one.

This is easy.  AJ McCarron.  Johnny Football.  One of the best college games last year.  Let’s see it again