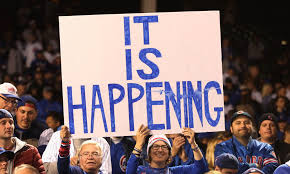 OK hear me out on this one.  The Cubs have been the most exciting team to watch in baseball over the last two years.  Last year they showed they were going to be a force for the next decade or so but ran into Daniel Murphy and the Mets magical run, being ousted in the NLCS.  This year they look even better, cruising to over 100 wins in the regular season and they didn’t face an elimination game in the first two rounds on their way to  claiming their first NL title in over 70 years.  Everyone is in love with END_OF_DOCUMENT_TOKEN_TO_BE_REPLACED

“If my hair were cut, I would lose my strength and be as weak as anybody else.” When Delilah realized that he had told her the truth, she sent a message to the Philistine kings and said, “Come back one more time. He has told me the truth.” Then they came and brought the money with them.Delilah lulled Samson to sleep in her lap and then called a man, who cut off Samson’s seven locks of hair. Then she began to torment him, for he had lost his strength. Then she shouted, “Samson! The Philistines are coming!” He woke up and thought, END_OF_DOCUMENT_TOKEN_TO_BE_REPLACED

It took 163 games to see who will be fighting for the MLB World Series.  Tonight the Pirates will play their first playoff game in 21 years but are they really?  If they lose tonight they are done already.  I know baseball is trying to get more teams involved and add excitement for the fans but the Pirates deserve more than one game.  They control their own fate but it will be a huge let down for the MLB to see this team gone with only one game.  Here are the AVS predictions for this years’ Fall Classic race. Wild END_OF_DOCUMENT_TOKEN_TO_BE_REPLACED