5 storylines of the second half in MLB 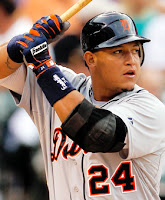 Cabrera has been the in the spotlight since he was a 19 year old World Series hero for the Marlins.  He is now in his 11th year, 6th with the Tigers, and is putting historic numbers that haven’t been since Babe Ruth.  Miggy’s first half stat line currently sits at .360/30/95, those are stats that every big league player would love to have for a full year.  We are watching the greatest hitter of this generation put up numbers that are impossible to fathom.  Can he win the Triple Cown in back to back years? When we look back on his Hall of Fame career, this year may stand out the best ever by a MLB player.
There are four teams that could win this division.  The preseason favorite, Blue Jays, are the only one that seem to out of the race.  Can the Red Sox hold their slim lead with the Rays, O’s and Yanks breathing down their necks?  Speaking of the Yanks, they will be a team to watch win or lose.  Can Jeter find the Yankee magic to bring them to the playoffs?  Will the makeshift roster hold long enough until the stars come back?  One thing to watch if the Yanks fall out of contention is Mariano Rivera.  He is on his farewell tour and it would be disappointing if his last saves are meaningless
It wouldn’t be a MLB article without steroids and A-Rod.  We still do not know if/when the commissioner will hand out suspensions and who will be on that list.  We know the big names of A-Rod and Bruan but it remains unclear how many other players will be affected.  An appeal will certainly come right after the decision is made public. This will most likely be a story for the next couple years but it the dominos should start the fall soon.
This 22 year old sensation has taken the baseball world by storm.  It was a shame for him not be in the All-Star game but the way he is going he will be there for the next decade.  For a player who has only played 40 career games he will have a lot of pressure to lead the Dodgers to the playoffs.  The Dodgers are have become the new Yankees by trying to buy a championship but their season will come down to a Cuban defector. 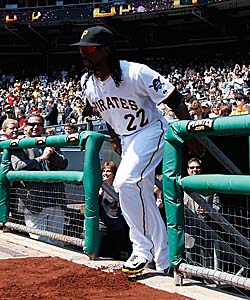 The Pirates are looking to break a 22 year old playoff drought. Their star player, Andrew McCutchen, was 4 years old the last time the Bucs were playing in October.  The 2 wild cards system will help Pittsburgh if they are unable to secure a division title.  Pittsburgh has a beautiful stadium and now have team to fill those seats.  Players like McCutchen and Pedro Alvarez will look to continue their development as stars and make this young team a contender for years to come.
-@Angelsteve89